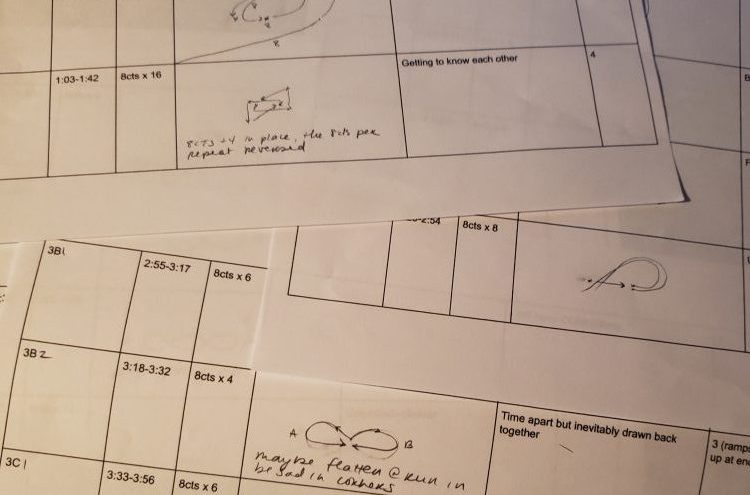 I’m going to blog along as I work on a choreography to “Andah Aleik” for my duo, io. Feel free to leave a comment with your process–I’m curious to know how people approach choreography. I’m going to take it step by step! Except sometimes I don’t always follow these steps. Whatevs. I hope it will be useful to you as you work on your own choreographies…or I hope you find it vaguely amusing. 🙂

So, you’ve got your sections. Now what?! It’s time to map out your floor patterns so you know where you’re going on stage.

I realize belly dancers often have less than ideal “stages,” so our grand plans may not be realized. I still think this is worth doing. You can always just, like, not do it, if your “stage” is the linoleum strip in front of an Indian buffet.

Usually when I choreograph for a group I try to prescribe where each individual will go. I’m not saying I’m good at it because I’m actually really bad at it (LIKE REALLY BAD), but I do try. For a soloist I mostly stick to shapes. This is a duet and I think general shapes will work for this too, especially because I don’t want to be overly specific.

There aren’t any rules about which shapes you use, but they do have different “feelings.” Think about how you felt as an audience member when dancers took certain routes on stage. I’ve listed some examples below and how I think about them–you may feel differently. I’d be interested to hear what you think about different floor patterns!

These are just my initial/generic reactions to each (for a soloist). They can change a lot depending on the specific movement and the music–for example, moving vertically (going from downstage to upstage) could be introspective, but it could also be scared or timid, depending on how you play it. It will also be different with multiple dancers interacting. The size of the path will depend on the energy level of the section (usually, bigger energy = bigger path).

There are two basic ways to make a floor path look nice:

Areas of the Stage

Different areas of the stage have different impacts on the piece as well. I admit I don’t apply these concepts very much because belly dance is all center stage all the time…I try not to spend too much time on the far sides of the stage and move upstage if I’m doing a taqsim or something similar, but that’s pretty much it. But it’s interesting to think about and maybe I’ll get a chance to work more with areas of the stage when I do my avant-garde theatrical belly dance show (that does not exist…yet).

In The Art of Making Dances by Doris Humphrey, she’s got a whole section on this. An interesting excerpt:

“As a simple rule of thumb, there are six weak areas and seven strong ones on a stage (see diagram below). Also add to the fact that movement, though personal on the footlights and therefore only suitable for intimate moods, loses power as it retreats upstage–except at dead center. Remember that the main paths which are illuminated, so to speak, are the diagonals and down the center; that the sides are very weak for either entrances or exits, or any movement. In fact, all places except the corners and center back are weak for emergences and departures.”

What do you think about the different stage areas?

I recommend doing this with pencil and paper, so you have the kinesthetic experience of sketching out the maps. You can “draw along” the song as it plays, or just sketch out based on what’s going on in your brain. Whatever works. I draw a rectangle that is the stage, and a bird’s-eye view of the path. The audience is at the bottom of the rectangle. You can orient yours however you like.

It may also be helpful to note how many counts are spend in which part of the map–as mentioned, you generally want to be symmetrical.

You can see mine below. Note that there is a figure-8 that is started in one section and completed in another. This is allowed! EVERYTHING IS ALLOWED. But if I were you, I would draw the pattern correctly. Mine don’t actually match up, which may explain why I found it difficult to walk. 😀

Walk along your map. This feels dorky, and it is–Ruby Beh told me to do it so I do it. 🙂 It helps you really see where your body is going to be on stage–there is no dance movement to distract you. If you are constantly going to the right first, you will notice it and will annoy you (probably). If you are hanging out too much in the left side of the stage, your piece will feel lopsided. These are all things that the audience will “feel,” but may not be able to put their collective finger on.

Here is my floor map, compressed into one minute for the ‘gram:

Generally, I’m happy with how this feels. My main issues are mostly because I’m only one person trying to be two. At one point I forgot which dancer I was. Anyway, impressions:

I will update with the final floor map when Aliceanna and I get together and work it out.

Next step is to improvise along your floor map… I’ll get more into that later!

My name is Mariza and I’m a bellydance artist and instructor in the Ellicott City, Maryland area. I teach online so you can dance with me from anywhere!

I've been busy working on another long-term projec

This is a different type of physique update but a

In typical "I don't know how to social media" fash

I realized I hadn't updated my site since August s

Hello friends! I haven't posted in a couple months

Today's combo is a choreography bit from "Rooh Ya

Another choreography chunk combo! It's fun and wei