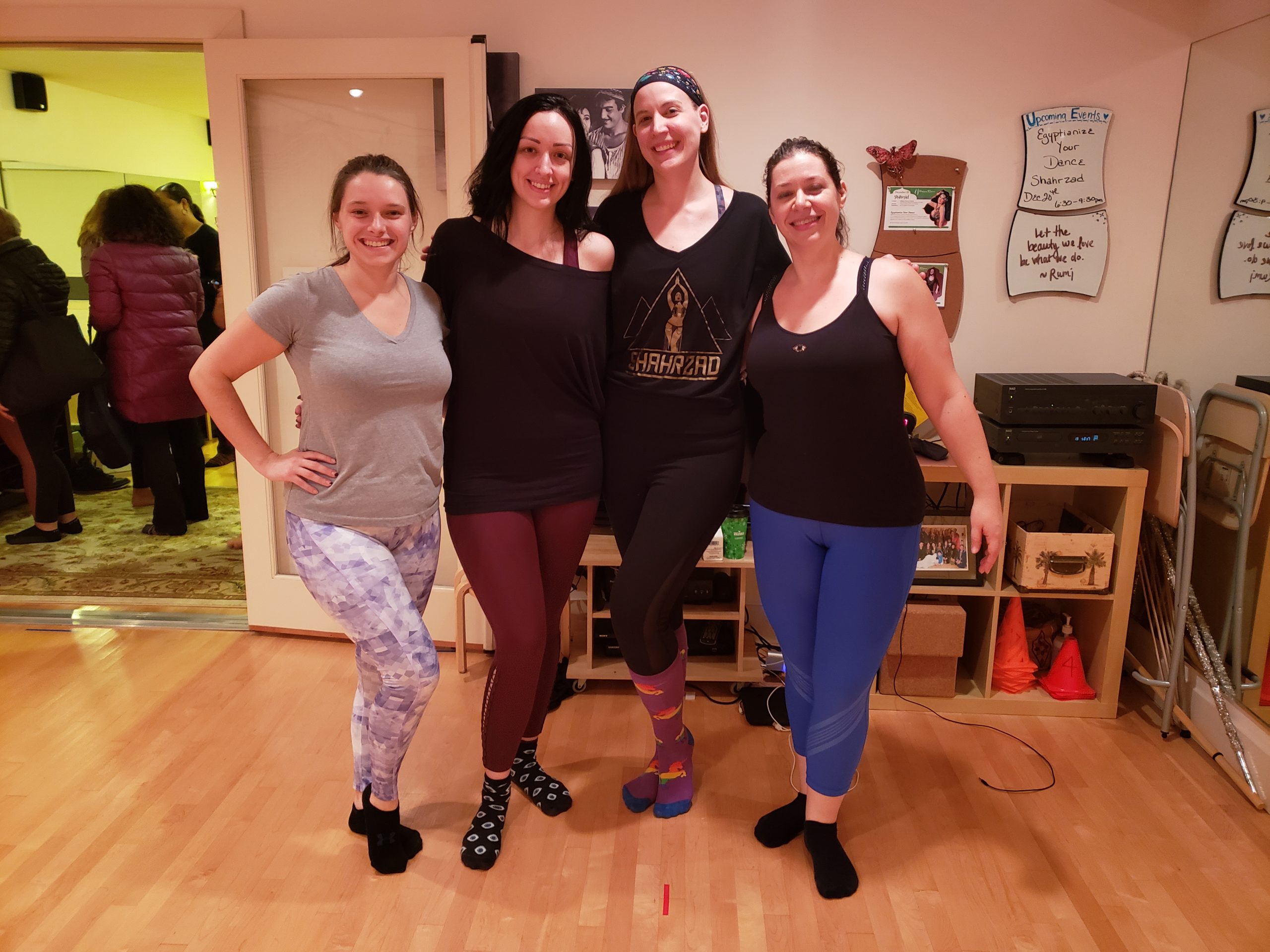 I recently attended a workshop with Shahrzad (https://shahrzadraqs.com/), hosted by Sahara Dance (https://saharadance.com/). She currently lives and works in Cairo and I was excited for the opportunity to learn from her!

She started off with a conditioning warm up. She talked about strengthening your ankles via stabilization exercises–the one she demonstrated had us standing on one leg while slowly swinging the other leg forward and back–for stronger and safer releve. We also did knee shimmies on the floor, which is one of those drills I always promise I’m going to do more often and then never do.

We started with some Golden Era technique. Of particular interest to me was how much you twist or tilt the rib cage in that style. Shahrzad showed us how the entire rib cage should twist forward and back when doing shoulder tilts, as opposed to isolating the shoulders. It’s such a simple thing that I hadn’t really thought about but it really “Golden Era”-ized the movement.

We learned a loose choreography to “Enta Omri.” Shahrzad talked a little about how she reacts to the lyrics in her movements: although she does consider them in her choreography, she doesn’t literally act out the lyrics because it doesn’t feel authentic to her. I liked that she emphasized doing what comes naturally to you as opposed to trying to “be” something in particular.

Towards the end of the shop we talked a bit about modern Egyptian music: Egyptian pop, Shaabi, and Mahraganat. It was so cool to get her perspective as somebody who is in Egypt now. She explained that Egyptian pop is usually just kinda flirty and light, while Mahraganat is all about backstabbing. Maybe a love song from time to time….but mostly the backstabbing. 😉

She said it’s common for people to dance with knives in Egypt so a lot of the hand/arm movements used when dancing to Mahraganat are miming dancing with knives–she taught us one that she called the “Grab ‘n’ Stab,” which is what it sounds like. It was fun to learn because I recognized it from some of her videos and now I actually know what she’s doing. 😛 The movements for that style of music are also generally bouncier and less isolated in general–more like “casual” club or street dancing.

My name is Mariza and I’m a Raqs Sharqi / belly dance artist and instructor in the Ellicott City, Maryland area.

We did something a little different for #bellydanc

I was tidying up my desk and couldn't help but enj

Brenda Ueland's book "If You Want to Write" is pri

In honor of all the drumming I've been doing latel

I have enough trouble keeping this rhythm on beat

Just casually holding my drum up and gazing into t

Oh, hello. I didn't see you there. I was just prac